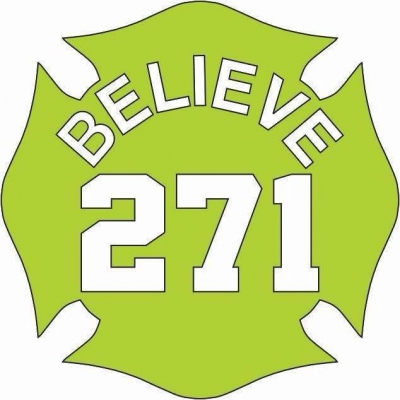 "No One Fights Alone!" 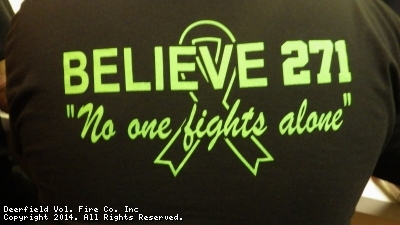 Believe 271 to give financial support to fire, auxiliary members

A special fund has been established through Believe 271 to assist members. Barneveld Chief Brian Healey and Captain Brian Palmer, co-founders of Believe 271, released their funding application on May 1.

“We are excited to be able to financially assist firefighters to help keep their minds off medical bills or grocery money and keep it focused on their families and winning their battles,” Palmer said.

Funding for Believe 271 was accomplished through donations and fund-raising.

“We have been very fortunate by the amount of support that the fire service has shown us,” Healey said. “Truly there is nothing stronger than the brotherhood of the fire service.”

Believe 271 was founded in February for the purpose of raising funds to support ill firefighters and ladies auxiliary members. The name is based on Oneida County Fire Coordinator car 271 Brian McQueen. McQueen was battling B-cell Lymphoma that required treatment in New York City. The original fund-raiser of firefighter helmet stickers was established to help support McQueen’s travel costs, but he turned down the funding in hopes Believe 271 would grow to assist many other firefighters.

For more information regarding Believe 271’s efforts, go to www.facebook.com/Believe271 or call Healey at 525-1646.

From Schuyler FD webpage:
Nothing is stronger than the brotherhood of the fire service. Believe 271 is dedicated to helping firefighters in their time of need. No one fights alone.
Description
Believe 271 was founded in an effort to show Oneida County Deputy Fire Coordinator (Car 271), FASNY Director, Past Whitesboro Chief Brian McQueen our support as he courageously battles B-Cell Lymphoma.

Believe 271 is not for profit dedicated to raise funds for other firefighters that are battling similar illnesses.
Anthony Pagliaro was selected as the 1st recipient of the BELIEVE 271 Fund on April 14th 2014 at the Schuyler Fire House
Picture gallery

This site has been viewed 353,330 times.
Calls
News
Events
Pictures
Apparatus
Maintained by the members and staff of Deerfield Vol. Fire Co. Inc. Designated trademarks and brands are the property of their respective owners. Copyright © 2006-2022. YourFirstDue Inc. All Rights Reserved. Content on this web site is supplied by Deerfield Vol. Fire Co. Inc. YourFirstDue Inc. cannot be held responsible or liable for any content, text, pictures, or any other media found on this web site.
Management login
Powered by